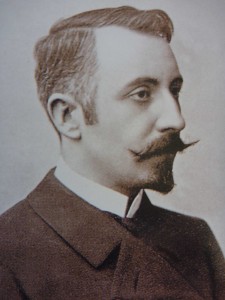 At the Sixth International Geographical Congress in London, July 1895, English geographer Clements Markham said: “The exploration of the Antarctic regions is the greatest piece of geographical exploration yet to be undertaken,” The Congress recommended that “this work should be undertaken before the close of the century.” Meanwhile the Brussels Geographical Society was assembling an Antarctic scientific expedition initiated and led by a young naval lieutenant, Adrien Victor Joseph, Baron de Gerlache de Gomery. The venture had an international flavor. In Norway, de Gerlache bought Patric, a 250-tonne whaler, and renamed it Belgica. His second-in-command was another Belgian, Lieutenant George Lecointe, and his crew included a Rumanian chief scientist, Emile Racovitza, Henryk Arçtowski, a Pole, as geologist, and a 25-year-old Norwegian, Roald Amundsen (then in training for his captain’s certificate), as first mate. The ship’s doctor, 32-year-old American Frederick Cook, had been in Greenland with Arctic explorer Robert Peary, who was later to claim to reach the North Pole.

Belgica left Antwerp on 16 August 1897 with new cabins and a new laboratory—additions that overloaded the vessel and made it painfully slow. The plan was to sail along the eastern side of the Antarctic Peninsula, to winter in Melbourne, and to visit Victoria Land the following summer. They reached Punta Arenas early in December, but de Gerlache decided to explore Tierra del Fuego, so they did not arrive off the Antarctic Peninsula until 20 January—almost the end of summer.

Over the next few weeks they explored the islands that line what is now Gerlache Strait. They took some of the first photographs of Antarctica, and Cook recorded one occasion as “perfectly dazzling … a photographic day.” They crossed the Antarctic Circle on 15 February and encountered pack ice, but pushed on until it became clear that they were trapped in ice for the winter. De Gerlache was suspected of planning their late southward passage from the outset, and there were recriminations. Amundsen wrote that they “faced the prospect of a winter in the Antarctic with no winter clothing … without adequate provisions … and even without lamps enough … It was a truly dreadful prospect.”

Pack ice can move as fast as 16 kilometers (10 miles) a day, and it carried Belgica westward. De Gerlache had sailed well southwest of the Antarctic Peninsula, and Belgica became trapped at 71°30´S 85°16´W on 2 March 1898; she would not be free until 14 March 1899, at 70°30´S 103°W. It was a harrowing time. The sun sank below the horizon on 17 May, not to reappear for 70 days. Each day became a paler mirror of the one before. In Through the First Antarctic Night Cook outlined the daily routine: “Rise at 7.30 am; coffee at 8; 9 to 10, open air exercise; 10 to 12, scientific work … for the officers, and for the marines, bringing in the snow, melting snow for water, replenishing the ship’s stores, repairing the ship, building new quarters, making new instruments, and doing anything which pertains to the regular work of the expedition; 12 to 2 pm dinner, and rest or recreation, 2 to 4, official work … 6 to 7, supper; 7 to 10, card-playing, music, mending, and on moonlight nights, excursions. At 10 o’clock we went to sleep.” Cook proved a tireless source of strength, boosting morale and providing medical help when symptoms of distress, and even of insanity, surfaced. Amundsen wrote: “He … was the one man of unfaltering courage, unfailing hope, endless cheerfulness, and unwearied kindness.”

Cook and Amundsen knew the importance of fresh meat in preventing scurvy, and had stored seal and penguin carcasses in the ice before all wildlife fled the advancing winter. But, as Amundsen related, “The commander … developed an aversion to the flesh of both … He was not content only to refuse to eat it himself, but he forbade any of the ship’s company to indulge in it.” De Gerlache and Lecointe took to their beds with scurvy, and the two Arctic veterans effectively took over. Cook provided a graphic description of penguin meat; it tasted like “a piece of beef, odiferous cod fish and a canvas-backed duck roasted together in a pot, with blood and cod-liver oil for sauce.” But he persuaded de Gerlache to take it as a medicine, and soon they all started to recover.

Cook described the momentous occasion when the bright top of the sun reappeared: “For several minutes my companions did not speak … we could not … have found words with which to express the buoyant feeling of relief, and the emotion of the new life which was sent coursing through our arteries.” His optimism was premature: summer progressed, but no way out of the ice presented itself and they faced the prospect of another winter trapped in the ice with little hope of survival. Antarctica’s history contains some of the most harrowing tales of adventure imaginable, and the Belgica’s began on New Year’s Eve when they saw open water 640 meters (2,100 ft) away. Cook suggested cutting a passage to freedom, although they had only three four-foot saws. It was a desperate measure, particularly as it was only a small basin of water they were making for, and they were relying on Cook’s faith that this was where any break to open water would appear. They worked day and night (indiscernible during this season of perpetual sunlight) for a month, cutting back toward the ship from the basin. By the end of January they had hacked through over 600 meters (2,000 ft) of ice. Then, as Amundsen wrote: “Imagine our horror on awakening to discover that the pressure from the surrounding ice pack had driven the banks of our channel together, and we were locked in as fast as ever.”

Not surprisingly, depression set in—but that, too, was to prove unjustified. On 15 February the ice relented and the passage they had cut reopened and extended right to the ship. They took Belgica to the basin under power, but they were still 11 kilometers (7 miles) from freedom and winter was approaching. Amundsen wrote: “Other weary weeks passed … Then the miracle happened—exactly what Cook had predicted. The ice opened and the lane to the sea ran directly through our basin! Joy restored our energy, and with all speed we made our way to the open sea and safety.” It was 14 March 1899, and Belgica returned to Antwerp on 5 November 1899.

Despite its problems, the expedition gathered much valuable scientific data. Arçtowski believed correctly that his bathymetric measurements suggested that the Antarctic Peninsula was an extension of the Andes—not directly across the Drake Passage but through the Scotia Arc. And, although the feat was achieved unwillingly, this was the first expedition to collect meteorological readings below the Antarctic Circle through a winter. The lowest temperature recorded was –43°C (–45°F).

The participants went on to varied futures. Amundsen became the first to reach the South Geographic Pole and de Gerlache completed several Arctic journeys. Cook won lavish praise for his leadership skills, but proved a flawed man: he subsequently claimed to have been the first to climb Mount McKinley, North America’s highest mountain, and to be first to the North Geographic Pole, but in both cases he falsified his records. He was imprisoned for fraudulently using the United States mail in 1923, released in 1929, received a presidential pardon in 1940, and died the same year.

Parts of the voyage of Belgica make sad reading. Two days after she reached the Antarctic Peninsula, a young sailor, Auguste-Karl Wiencke, fell overboard; he held onto a line for some time, but sank before he could be saved. Later, during the long Antarctic night of 1898, paranoia and fierce arguments developed. Men took to their bunks for days at a time, and 30-year-old Emile Danco, the popular geophysicist, died of cold and was buried at sea through a hole cut in the ice. There were lighter moments: on Easter Sunday, to keep up morale, a “Grand Concourse of Beautiful Women” was held, and won by “Princess de Chimay” and “Cléo de Mérode.” But even the ebullient Cook wrote: “It is so long since we have seen a girl that I doubt our ability to pass judgment.”