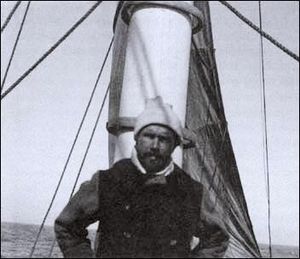 The other part of Shackleton’s expedition, the Ross Sea Party on Aurora, experienced as many perils as those on Endurance; indeed, while Shackleton lost not a man under his direct command, three died on the other side of Antarctica.

Aurora was to moor off Ross Island for the winter as a base for a sledging party to lay food depots across the Ross Ice Shelf and onto the Beardmore Glacier for Shackleton’s homeward journey. The ship left Hobart on Christmas Day 1914 and arrived at Ross Island on 9 January 1915, captained by Aeneas Mackintosh, who had lost an eye on Shackleton’s Nimrod expedition. Also on board was an experienced polar veteran, Ernest Joyce, but Shackleton was vague about which of the two was in command, which led to friction and disaster.

Mackintosh decided to use Scott’s Cape Evans hut, which was in excellent condition. On 24 January the first depot-laying expedition set out. Mackintosh was eager to get moving in case Shackleton arrived at the end of this first summer, and—against Joyce’s advice—he pushed the dogs too hard; all but five died, and much of the task remained uncompleted.

Aurora was to be a supply and accommodation base until spring, when the laying of supply depots would begin, and by mid-March she was secured at Cape Evans by her two anchors and seven steel hawsers. The 10 men who would lay the depots were ashore with minimal equipment. But on the night of 6 May there was a violent storm, and by 3.00 am, the ship had vanished— its mooring of ice had blown away, leaving only bent anchors and snapped hawsers. It had happened before, and they expected Aurora to return, but the vessel was as firmly gripped in ice as Endurance on the other side of the continent; almost a year would pass before Aurora broke free and limped back to New Zealand.

After another blizzard, they knew that they were marooned for the winter. Mackintosh’s first depot-laying expedition was still struggling back, and the four at Cape Evans frantically searched to see what Scott had left behind. They found tins of jam, flour, and oatmeal, and some pemmican, but no soap, tobacco, or medical supplies, and their only clothing was what they were wearing and some spare underwear. They killed seals for meat and fuel—and kept taking scientific observations.

By 2 June, the sea ice was firm enough for Mackintosh’s party to get back to Cape Evans, where they learned of the loss of Aurora. Rescue might be two years away, but they still had to lay supply depots for Shackleton in the spring or he would certainly die on the ice shelf. Supplies left by Scott, including kerosene and two Primus stoves, were a life-saving discovery, and they also found cake, chocolate, sleeping bags, socks, underwear, and a tent that they cut up and sewed into sledging clothes.

After taking an inventory, they planned to carry 1,800 kilograms (4,000 lb) of supplies onto the Ice Shelf and establish the furthest depot at Mount Hope, at the foot of the Beardmore Glacier, at 83°40´S. Joyce was deferring to Mackintosh, but relations were strained. In mid-August Mackintosh and chief scientist Fred Stevens reached Shackleton’s hut at Cape Royds and found cigars, tobacco, food, and soap.

During September they hauled supplies across to Hut Point, the starting point for sledging south. Joyce wrote: “Most of us wore the canvas trousers made from Scott’s old tent, and they froze on us like boards.” On 26 October they found a sledge left as a marker by Cherry-Garrard, a note for Scott, and six boxes of dog biscuits impregnated with cod liver oil; Joyce wrote: “At last we have struck gold in the Antarctic.”

On 3 January 1916 one Primus was burning its own metal, and the party that was depending on it had to turn back. The men were failing, too: by 82°S Mackintosh was weakening and Arnold Patrick Spencer-Smith, the chaplain, had scurvy. They left him in a tent and pushed on to establish the southernmost supply depot at Mount Hope on 26 January. When they returned, Spencer-Smith could not walk; they carried him on the sledge until he died on 8 March and then they buried him in the ice.

By now they were all suffering from scurvy, and when a blizzard stopped them close to where Scott and his companions had perished, they seemed set for the same fate, but they reached Hut Point on 11 March. They had been away for more than six months, “without change of clothing or a bath.” The four who had turned back earlier had reached Cape Evans, and now the survivors at Hut Point could eat seal meat and recover their strength. Joyce calculated that they must wait four months for the surface to be stable enough to cross to Cape Evans, but by 8 May after a blizzard had cleared much of the sea ice, and Mackintosh announced that he and Hayward would walk across the 19 kilometers (12 miles) that remained. It was a suicidal decision: a blizzard arose, and Mackintosh and Hayward were never seen again. On the night of 15 July, the remaining three, Dick Richards, Ernest Joyce, and Ernest Wild, crossed to Cape Evans and rejoined the other four. The seven men then had to endure a long wait for rescue.

Meanwhile, Aurora and her crew had drifted 1,130 kilometers (700 miles) in the ice. North of the Antarctic Circle, as summer approached, they hoped that the ice would open up and release the ship, but the looser ice did even more damage; when Aurora was finally freed in March 1916, she was leaking and relied on a makeshift rudder to cover the 5,220 kilometers (2,000 miles) to New Zealand. On 3 April 1916 she was taken under tow to Port Chalmers, near Dunedin.

Rescue came to the Ross Sea on 10 January 1917. Dick Richards was outside looking for seals when he saw a ship’s smoke. He walked calmly back into the hut and casually said: “There’s a ship out there.” When they saw that the ship was Aurora, the men shouted for joy. The ultimate miracle was when they realized that one of the men approaching them was Shackleton—coming from the north, not lost in the south as they had thought. John King Davis, who was commanding Aurora, wrote of the encounter: “They were just about the wildest looking gang of men I have ever seen … But the marks of their great physical and mental privations went deeper than their appearance … factors had combined to render these hapless individuals as unlike ordinary human beings as any I have ever met … They were dazed by it; we were excited.”

Aurora docked in Wellington on 9 February 1917, and the Ross Sea Party’s ordeal was over. Joyce’s claim that their expedition was “without parallel in the annals of polar sledging” was justified. The Discovery sledging party of Scott, Shackleton, and Wilson was out for 93 days; Shackleton’s “Farthest South” took 120 days of sledging; and Scott’s tragic final venture lasted 150 days. The Ross Sea Party was on the ice for 199 days, without adequate clothing or support, and burdened with food for the failed polar party—an incredible achievement.