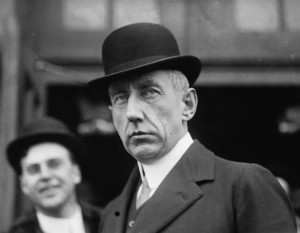 Roald Amundsen was a man more suited to adventure than for city life. 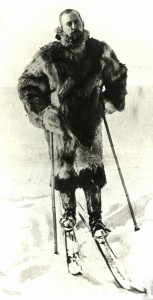 Amundsen has been described as a consummate professional in an age of amateurs. The story of his journey to the South Pole certainly reveals organizational skills that his competitors lacked, but there were also controversial elements, even errors, in the Norwegian polar bid.

Amundsen’s chronicle of his expedition reveals a warmhearted, generous personality, far from the cunning manipulator that Scott’s supporters painted him at the time. He rejected the title of adventurer: “For him [the explorer], adventure is only an unwanted interruption … He does not seek titilation, rather previously unknown facts … an adventure is simply an error in his calculations … Or is it a very unhappy proof that no one can take into consideration all eventualities? … Any explorer experiences adventures. They excite him and he looks back on them with pleasure, but he never seeks them out.” 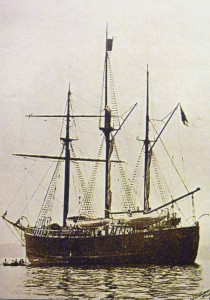 The strong, round-hulled Fram, purpose-built for Nansen was the perfect polar vessel for its time

Amundsen had been the first to conquer the Northwest Passage, and had spent a winter in Antarctica with Adrien de Gerlache on Belgica. He was a meticulous planner, but in 1909, when he was aiming to be first to the North Pole, and had borrowed Fridjof’s Nansen’s Fram for the purpose, events forestalled him: in September of that year, both Robert Peary and Frederick Cook claimed the North Pole. Amundsen recalled: “Just as rapidly as the message had traveled over the cables I decided on my change of front—to turn to the right-about, and face to the South.” With a secrecy that later attracted criticism, he told only his brother, and later Lieutenant Thorvald Nilsen, captain of Fram. The crew found out in Madeira; until then, they believed they were sailing around Cape Horn and up to the Bering Strait to take advantage of the Arctic drift. They all agreed to stay for the new destination. 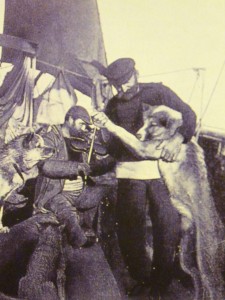 Fram left Christiana (now Oslo) on 7 June 1910, and sailed from Madeira on 9 September, with 19 men and 97 dogs—the number of dogs had risen to 116 by January 1911. Amundsen telegraphed Scott, stating:

“Beg leave to inform you Fram proceeding Antarctic. Amundsen,” and notified his sponsors and Nansen in the same way. Secrecy was not Amundsen’s only odd trait: he also would not take a doctor on his expeditions, largely because he thought an expedition doctor, being well educated, could encourage dissent.

Having read reports of previous expeditions, Amundsen decided to establish his base on the ice at the Bay of Whales because it was closer to the Pole than Ross Island. Fram arrived there on 14 January, and the crew erected their prefabricated hut at “Framheim.” They killed seals and penguins for food, and Amundsen wrote: “An Emperor penguin just came on a visit—soup-kettle.” On 4 February, Scott’s ship Terra Nova visited for a day, but Scott had already been left on Ross Island. Amundsen’s men established supply depots as far as 82°S, and Fram departed northward before the Bay of Whales froze over.

Surprisingly, on an expedition so well planned, there was one key blunder: they had the Almanac for 1911, but had forgotten the Almanac for 1912, which contained essential information for fixing the position of the Pole. If Amundsen were to claim the Pole, he had to be there before the end of 1911.

Framheim was Amundsen’s orderly base at the Bay of Whales

When the sun appeared on 24 August after four months of darkness, the sledges were already packed for the polar run. Indeed, Amundsen set off for the South Pole in September—very early in spring—but had to return because conditions were too cold for survival. The dogs, after six months of leisure, did not “understand that a new era of toil had begun.” On 19 October five men started for the Pole on skis and sledges, and by 7 November they were far enough across the Ross Ice Shelf to see mountains to the south. At the base of the climb to the polar ice cap, Amundsen outlined his plan: “The distance … from this spot to the Pole and back, was 683 miles [1,100 km]… we decided to take provisions and equipment for sixty days on the sledges, and to leave the remaining supplies … and outfit in depot … We now had forty-two dogs. Our plan was to take all forty-two to the plateau; there twenty-four of them were to be slaughtered, and the journey continued with three sledges and eighteen dogs. Of the last eighteen, it would be necessary, in our opinion, to slaughter six in order to bring the other twelve back to this point. As the number of dogs grew less, the sledges would become lighter and lighter, and when the time came for reducing their number to twelve, we should only have two sledges left.”

His calculations were almost perfect: they took eight days less than the time allowed, and returned with 12 dogs. They climbed the Axel Heiberg Glacier from 17 to 21 November, and with some sadness, because a “trusty servant lost his life each time;” they shot the dogs at a camp they called the Butcher’s Shop at the top of the glacier.

On 8 December they passed Shackleton’s 88°23´S. It was a milestone for the 39-year-old Amundsen, who wrote: “No other moment of the whole trip affected me like this. The tears forced their way to my eyes …” They laid down their final depot here, and made a push for the South Pole.

“At three in the afternoon a simultaneous “Halt!” rang out from the drivers. They had carefully examined their sledge-meters and they all showed the full distance—our Pole by reckoning. The goal was reached, our journey ended. … I had better be honest and admit straight out that I have never known any man to be placed in such a diametrically opposed position to the goal of his desires as I was at that moment. The regions around the North Pole—well, yes, the North Pole itself—had attracted me from childhood, and here I was at the South Pole. Can anything more topsy-turvy be imagined?

“… Pride and affection shone in the five pairs of eyes that gazed upon the flag, as it unfurled itself with a sharp crack, and waved over the Pole. I had determined that the act of planting it—the historic event—should be equally divided among us all. It was not for one man to do this; it was for all who had staked their lives in the struggle, and held together through thick and thin. “…  Everyday life began again at once … Of course, there was a festivity in the tent that evening—not that champagne corks were popping and wine flowing—no, we contented ourselves with a little piece of seal meat each, and it tasted well and did us good.”

With the exactness that characterized the whole expedition, they spent the next few days surveying around their camp until they were certain that they had reached the Pole by any calculations. On 17 December, at the point they concluded was the Pole, they erected a tent with a Norwegian flag on top and “inside the tent, in a little bag, I left a letter, addressed to HM the King, giving information of what we had accomplished. The way home was a long one, and so many things might happen …” They also left some clothes and a sextant, before lacing the tent and turning to the north.

By 6 January they were back on the ice shelf, and at 4 am on 25 January they reached Framheim, after a 99-day journey. They were probably fitter and healthier than when they left. The science of nutrition was in its infancy, but at Framheim the Norwegians ate a healthy mixture of wholemeal bread, berry preserves, and undercooked seal meat. Whereas Shackleton’s party barely struggled back to rescue and Scott’s party did not come back at all, because their rations resulted in starvation as well as nutritional deficiencies, Amundsen’s men ate well, and had so much food on hand that he could write: “We are bringing the purveyors of our sledging samples of their goods that have made the journey to the South Pole and back in gratitude for the kind assistance they afforded us.” Shackleton sacrificed a biscuit; Amundsen brought back food as souvenirs.

Five days after they arrived back at their coastal base, the men were sailing to Hobart on Fram. On 7 March 1912, Amundsen telegraphed news of his success to his brother, who announced it to the world. When Amundsen heard that Mawson needed dogs for his Australasian Antarctic Expedition; he donated 21, keeping only puppies and survivors from the conquest of the South Pole.