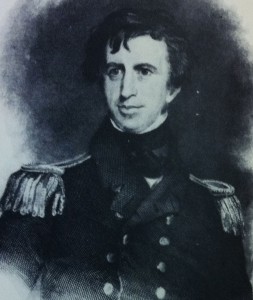 On 18 August 1838 the United States Exploring Expedition, nicknamed Ex Ex, left Chesapeake Bay commanded by the determined but irascible and largely inexperienced 40-year-old lieutenant Charles Wilkes. The fleet was led by Vincennes, a 780-tonne war sloop and the first United States Navy ship to circumnavigate the globe; the others were Peacock, Porpoise, Sea Gull, Flying Fish (the baby of the fleet, a 96-tonne New York pilot boat), and Relief, a capricious supply ship that was to prove a handicap. More than 400 men were on board, including nine scientists. At Orange Harbor, Tierra del Fuego, Ex Ex split into three groups: Vincennes and Relief were to survey the southern tip of South America; Wilkes, on Porpoise accompanied by Sea Gull, would sail south to try to outdo Weddell; Peacock and Flying Fish would explore southwest in an attempt to pass Cook’s southernmost point.

Winter was approaching—it was already 26 February 1839—and Wilkes gave up a mere 10 days later and well short of the Antarctic Circle, defeated by impenetrable ice and inadequate clothing. On the retreat to South America Porpoise almost ran aground on Elephant Island, but the fog parted just in time for the hard-pressed crew to avert disaster. Peacock and Flying Fish were driven apart by a gale 48 hours after leaving port. Both ships endured great hardships. The valiant little Flying Fish had a particularly bad time; she disintegrated further in every storm, and the sailors were constantly wet and their quarters awash. When the thermometers broke, they suspended a tin cup of water and resolved to travel south until it froze. This they did, and on 22 March they reached 70°14´S—still a degree short of Cook—before accepting they would not outdo the British explorer and turned north.

Three days later the two vessels met, compared dismal experiences, and separated, Peacock for Valparaíso, Flying Fish for Orange Harbor. It was a depleted expedition that regrouped in Valparaíso at the end of June: Sea Gull had been lost in a storm off Chile, and the cumbersome and unseaworthy Relief was sent home. The remaining four ships sailed to investigate the Pacific. Scientifically this Pacific leg was more successful than the Ex Ex’s first Antarctic venture, but the relationship between Wilkes and his scientists and officers deteriorated; some even privately questioned his sanity. In Sydney in December 1839 officials were aghast at the terrible condition of the ships and the lack of equipment, heating, and waterproofing for their next sojourn in the icy south, and the question of Wilkes’s sanity—or at least his judgment—became a matter of widespread concern. When Wilkes offered the naturalists the chance to stay in Australia and meet the ship in New Zealand in March 1840, they all accepted. A typical sentiment of those who did sail south on 26 December was this journal entry: “I do not suppose that a vessel ever sailed under the [United States] pendant with such a miserable crew … It will be a great wonder to me if we return from the southern cruise.”

For his second Antarctic exploration Wilkes had been ordered to sail south from Tasmania as far as he could, to explore the continent westward to longitude 45°E, then to proceed to Iles Kerguelen. He substantially modified these instructions, sailing only as far as 105°E and then heading for New Zealand’s Bay of Islands. He also entreated his captains to “avoid a separation as the lives of … the squadron may be jeopard[iz]ed by it.” Within 10 days Flying Fish and then Peacock were separated from the others and from each other. Flying Fish reached the ice but wisely turned toward New Zealand in early February. On 11 January 1840, Porpoise and Vincennes reached the “icy barrier” at 64°11´S 164°30´E and, proceeding to the west, fortuitously met up with Peacock five days later. That same day the lookouts on all three ships reported seeing land—but nothing was entered in any of the ships’ logs. Visibility was good, but it remains doubtful whether they were seeing snowy land or a glacier, or merely trapped icebergs. Wilkes later wrote in his narrative for 19 January that he was “fully satisfied that it was certainly land,” and named Cape Hudson after the skipper of Peacock—but there is no record in the ship’s log. His chart showed land 65 kilometers (40 miles) away, but later voyages established that the closest land lies 190 kilometers (120 miles) from his position that day. The first sighting of land entered in the ship’s log was on 28 January.

On 24 January Peacock damaged its rudder in ice, narrowly escaping destruction, and limped back to Sydney and across to New Zealand. Meanwhile Porpoise and Vincennes pressed on to the west. Six days later Porpoise sighted Dumont d’Urville’s Astrolabe through the fog. According to Porpoise’s commander, Cadwalader Ringgold, he intended to pass under the stern of the other vessel but when he saw it putting on more sail, “without a moment’s delay, I hauled down my colors and bore up on my course before the wind.” Apparently national egos are highly sensitive to any perceived slight, even in the wilds of Antarctica. Porpoise continued westward before setting course for New Zealand on 14 February 1840. Vincennes also continued its coastal survey, skirting the edge of the pack ice under an increasing cloud of paranoia. Wilkes wrote: “I cannot help feeling how disgusting it is to be with such a set of officers (one or two I must except) who are endeavoring to do all in their powers to make my exertions go for nothing.”

On 21 February Vincennes reached what is now called the Shackleton Ice Shelf, which extends almost 160 kilometers (100 miles) out to sea. With no time left for the long detour around Iles Kerguelen, Wilkes sailed for Sydney to report his success, and for a surprise meeting with Peacock. He had followed more than 2,700 kilometers (1,700 miles) of the pack ice, and could be justly proud of the achievement. He had also seen enough to confidently proclaim the landmass a continent—the first explorer to do so.

Wilkes was certain that he was about to announce the first discovery by a national expedition, rather than by whalers such as Balleny and Biscoe, of an Antarctic landmass south of the Pacific and Indian oceans. But word soon arrived from Hobart that Dumont d’Urville had not only seen land on the afternoon of 19 January but had landed on an island that day. Wilkes countered that he had seen land in the morning of that day, and later that he and others had first seen land on 16 January. These claims would later form the basis of a charge of “deliberate and wilful falsehood” at his court martial. Wilkes’s cause was not helped when James Clark Ross returned from Antarctica to say that he had sailed across an area marked as solid land on the chart that Wilkes had generously given him.

It was another two years before the expedition finally returned home, but only three months of the four-year voyage had been spent below latitude 60°S. During extensive Pacific exploration Peacock had been wrecked (with no loss of life) off the mouth of the Columbia River, and had been replaced by Oregon, and Flying Fish had been sold in Singapore. Wilkes deliberately issued time-wasting orders to delay Porpoise and Oregon so that he would arrive in New York on Vincennes several weeks ahead of them.

He did, but inevitably there were recriminations. Vincennes docked in New York on 10 June 1842, and by 25 July Wilkes was facing a court martial. He was found guilty on just one charge—illegal punishment of seamen by ordering more than 12 strokes of the lash—and was reprimanded. It did not hinder his naval career, but his talent for controversy persisted: in 1861, during the American Civil War, he boarded a British ship to remove some Confederate officers and nearly dragged Britain into the war, with potentially catastrophic results, until Lincoln personally intervened. The next year, his efforts to protect American interests in the West Indies brought claims of neutrality violations by several nations. He retired from the United States Navy with the rank of rear-admiral in 1866, and died in February 1877.