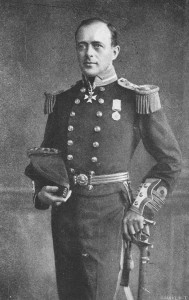 Scott arrived in Melbourne on 12 October 1910 on his way to Antarctica to unwelcome news: Roald Amundsen was also bound for the South Pole. The race had begun. As well as fretting about the unexpexted personal competition, Scott was annoyed that the Norwegians were aiming for the Pole that he considered his by right. Science was important to his second polar expedition, but so was claiming the Pole for Britain. However, from the start Scott doubted that he would win the race; on 11 October, he wrote: “I don’t know what to think of Amundsen’s chances. If he gets to the Pole, it must be before we do, as he is bound to travel fast with dogs and pretty certain to start early.”

Scott had announced his second Antarctic expedition in September 1909, but money was slow to come in, despite widespread endorsement. The Terra Nova, which had come to his support on the previous expedition, was to be the expedition ship. Edward “Teddy” Evans was to be his second-in-command. Lawrence “Titus” Oates and Apsley Cherry-Garrard each contributed a thousand pounds, and were recruited as an officer and assistant zoologist, respectively. Oates wrote to his mother: “Points in favor of going. It will help me professionally as in the army if they want a man to wash labels off bottles they would sooner employ a man who has been to the North Pole [sic] than one who has only got as far as the Mile End Road. The job is most suitable to my tastes. Scott is almost certain to get to the Pole and it is something to say you were with the first party. The climate is very healthy although inclined to be cold.”

Terra Nova left Britain at the beginning of June 1910, and Scott joined the ship in South Africa. The expedition photographer, Herbert Ponting, boarded in Lyttelton, New Zealand, with 19 Siberian ponies and 33 sledge dogs (and one collie bitch) shipped from Russia. After three weeks in the ice, the ship was off Ross Island on 4 January 1911. Hut Point and Cape Crozier were frozen in, so they erected their hut at Cape Evans. It had a wardroom for the 16 officers and scientists and a separate mess deck for the 9 crewmen.

Before winter, a western party led by Griffith Taylor went to the Dry Valleys, and an eastern party sailed Terra Nova toward King Edward VII Land, and soon returned to tell of meeting Amundsen and the Fram, so the land party it carried had to move to Cape Adare. Scott was surprised to hear that the Nor-wegians were so close; he had assumed that they would start from the Weddell Sea side of the continent. He wrote: “There is no doubt that Amundsen’s plan is a very serious threat to ours. He has a shorter distance to the Pole by 60 miles [97 kilometers]—I never thought he could have got so many dogs safely to the ice. His plan for running them seems excellent. But above and beyond all he can start his journey early in the season—an impossible condition with ponies.” 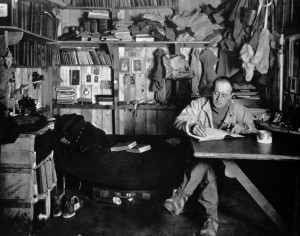 Scott knew the limitations of his ponies. He had led the southern party intending to set up a supply depot at 80°S, but while the 26 dogs performed well, the eight ponies kept sinking in the soft snow, and even when the party switched to marching at night, when the snow was firmer, progress was slow. Finally, One Ton Camp was established 31.5 nautical miles (equivalent to about 58 kilometers) short of their goal—a shortfall that proved fatal.

Scott insisted on a regular routine through the dark winter months. The most remarkable exploit was the bleak excursion recounted in Apsley Cherry-Garrard’s The Worst Journey in the World. With Bill Wilson and “Birdie” Bowers, he set out in the dark and bitter cold for Cape Crozier, 100 kilometers (62 miles) away to collect Emperor penguin eggs because Wilson believed they might provide a clue to the evolution of reptiles into birds. They returned five weeks later, with just three eggs, and ravaged faces. (The eggs were analyzed years later, with inconclusive results.) Cherry-Garrard’s masterpiece of polar literature begins: “Polar exploration is at once the cleanest and most isolated way of having a bad time which has been devised,” and ends: “if you have the desire for knowledge go out and explore … If you march your Winter Journeys you will have your reward, as long as all you want is a penguin’s egg.”

On 24 October 1911 the motor sledges set off to lay depots, and on 1 November the main polar party, led by Scott, left Cape Evans. There were 16 men, 10 ponies, 33 dogs, and 15 sledges, including the two motorized ones. By 6 November they had passed the abandoned motor sledges—their crew had continued south but were now man-hauling. On 21 November the two groups met, and on 9 December they reached the bottom of the Beardmore Glacier: Scott was literally following in Shackleton’s footsteps. Here they shot the surviving ponies, and men and dogs carried on up the glacier. It was hard work, especially as they could not ski, and even Scott admitted that “it would be impossible to drag sledges on foot.” On 11 December the dogs were sent back and 12 men continued, hauling three heavily laden sledges. On Tuesday 12 December Amundsen reached the South Pole while Scott was still on the Beardmore Glacier, writing: “We got bogged again and again, and, do what we would, the sledge dragged like lead … Considering all things, we are getting better on skis.” By 21 December Amundsen was on his way home and Scott’s party was at Upper Glacier Depot. One of the supporting sledge teams turned back here, and eight men continued with two sledges.

On 3 January Scott made a fatal decision. He told his last support team to turn back the next day, but that one of them, “Birdie” Bowers, would come with him to the Pole. The sledge was already fully laden with supplies for four and Bowers had no skis, so the team would be limited to his pace. Even so, on Thursday 4 January Tom Crean, “Teddy” Evans, and William Lashly headed back, while Scott, Wilson, Oates, Bowers, and Petty Officer Edgar Evans carried on—never to be seen alive again.

At first things went well. On 9 January they passed Shackleton’s furthest south (88°23´S), and Scott wrote: “All is new ahead.” But by 11 January he was expressing doubts: “We ought to do the trick, but oh! for a better surface.” On 16 January they saw a cairn of Amundsen’s; Scott’s frustration is clear: “The worst has happened… sledge tracks and ski tracks going and coming and the clear trace of dog’s paws … The Norwegians have forestalled us and are first at the Pole … All the day dreams must go; it will be a wearisome return. Certainly we are descending in altitude—certainly also the Norwegians found an easy way up.”

They reached what they thought was the Pole the next day, and found the Norwegians’ tent the day after. Scott wrote despairingly: “The Pole. Yes, but under very different circumstances from those expected. We have had a horrible day … Great God! this is an awful place and terrible enough for us to have labored to it without the reward of priority … Now for the run home and a desperate struggle.”

The dispirited party started back, but by 23 January Scott reported that Evans, the strongest of them, “is a good deal run down,” and that “Oates gets cold feet.” They reached Upper Glacier Depot on 7 February. Although they had mislaid or misjudged a day’s supply of biscuits, and although Scott had noticed that Evans was “going steadily downhill,” they spent two days adding 16 kilograms (35 pounds) of mineral specimens collected at Mount Darwin to their sledging load. Scott noted: “The morraine was obviously so interesting that … I decided to camp and spend the rest of the day geologizing. It has been extremely interesting.” The fossils that the rocks contained later proved valuable in assessing the geological history of Antarctica, but the time spent collecting them and the effort of carrying them contributed to their deaths.

On Saturday 17 February, near the foot of the Beardmore Glacier, Edgar Evans lost his life. He had had several bad falls, and was straggling behind, and then disappeared and was found partly undressed and delirious. He sank into a coma and died that night.

By early March they were all in poor condition, particularly Oates, who had severe frostbite in his feet. On 10 March Scott wrote: “Things steadily downhill. Oates’ foot worse. He has rare pluck and must know that he can never get through. He asked Wilson if he had a chance this morning and of course Bill had to say he didn’t know. In point of fact he has none. Apart from him, if he went under now, I doubt whether we could get through. With great care we might have a dog’s chance, but no more.”

A week later Scott wrote: “Friday March 16 or Saturday 17—Lost track of dates but think the last correct … At lunch the day before yesterday, poor Titus Oates said he couldn’t go on: he proposed we should leave him in his sleeping bag. That we could not do.” They struggled on, but the same entry records: “He slept through the night before last, hoping not to wake; but he woke in the morning—yesterday. It was blowing a blizzard. He said ‘I am just going outside and may be some time.’ He went out into the blizzard and we have not seen him since … I take this opportunity of saying that we have stuck to our sick companions to the last.”

On March 19 a blizzard held them down in their tent just 11 miles from One Ton Depot, and their fuel ran out three days later. Scott’s diary entry for 29 March records his last words: “Outside the door of the tent it remains a scene of whirling drift. I do not think we can hope for any better things now. We shall stick it out to the end, but we are getting weaker… and the end cannot be far.

“For God’s sake look after our people.”

Eight months later, on 12 November 1912, expedition survivors found their tent and their bodies. The tent was closed and they erected a cairn of ice above it, with skis forming a rough cross on top. They marched 20 miles south to look for the body of Oates, but found the area covered in snow so built a cairn in his memory. Finally, they erected a huge wooden cross on the summit of Ross Island’s Observation Hill, with a dedication that concluded: “to strive, to seek, to find, and not to yield.”

Judgment of the British Antarctic explorers of the Heroic Age has shifted in prevailing attitudes. Scott was cast as a hero for most of the twentieth century, but recent critics have suggested that his only achievements were to write well and to die well. Shackleton has even been called unpatriotic because in 1909 he had enough provisions to reach the Pole but turned back. He and his companions could have claimed the Pole for Britain and died on their way back. By not sacrificing himself and his men, Shackleton is held to have left it to a foreigner to be first to the Pole. Scott was unlikely to have made the same decision. On the contrary, his message to the public as he was dying ran, in part: “The causes of the disaster are not due to faulty organization but to misfortune in all risks which had to be undertaken … I do not regret this journey, which has shown that Englishmen can endure hardships, help one another and meet death with as great a fortitude as ever in the past.” Scott’s memorial service in St Paul’s Cathedral in February 1913 was attended by King George V, and Scott’s widow, Kathleen, received his knighthood.