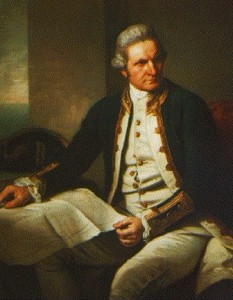 When the Royal Society asked the Admiralty in 1768 to commission a voyage to the Pacific to observe the transit of Venus across the Sun, James Cook was their rather surprising choice of leader. Alexander Dalrymple who optimistically expected the great South land to begin south of the tropics and be populated with 50 million inhabitants had been lobbying to lead a voyage south. Cook, born in Yorkshire on 27 October 1728,was an experienced seaman and a self-taught mathematician and navigator, but was largely unknown. He was also commissioned to find Terra Australis Incognita. He left Plymouth in HMS Endeavour on 26 August 1768 and returned on 12 July 1771, having observed the transit, claimed New Zealand and the east coast of Australia for Britain, and mapped a great deal of the Pacific Ocean.

Cook’s first voyage, successful though it was, did not discover the fabled Southern Continent. Naturalist Joseph Banks deduced from his observations: “That a Southern Continent exists I firmly believe,” while Cook concluded that “as to a Southern Continent I do not believe any such thing exists unless in a high latitude.” But he was determined to resolve the issue once and for all, and with his second venture a question more than two millennia old would be answered.