Posted on April 7, 2014 by antarcticguide 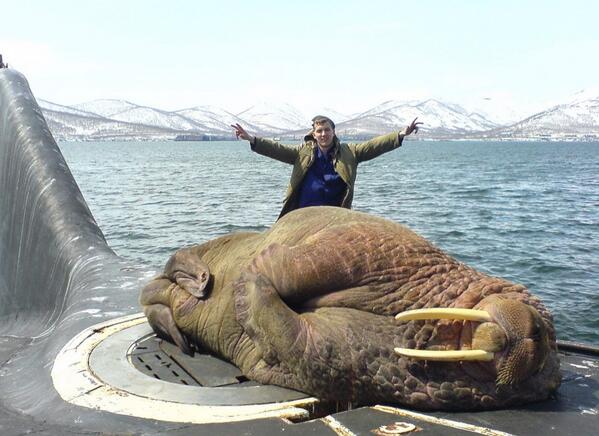 Posted in Antarctic Wildlife | Tagged Russian, submarine, walrus | Comments Off on A walrus naps on a Russian submarine

Posted on April 5, 2014 by antarcticguide 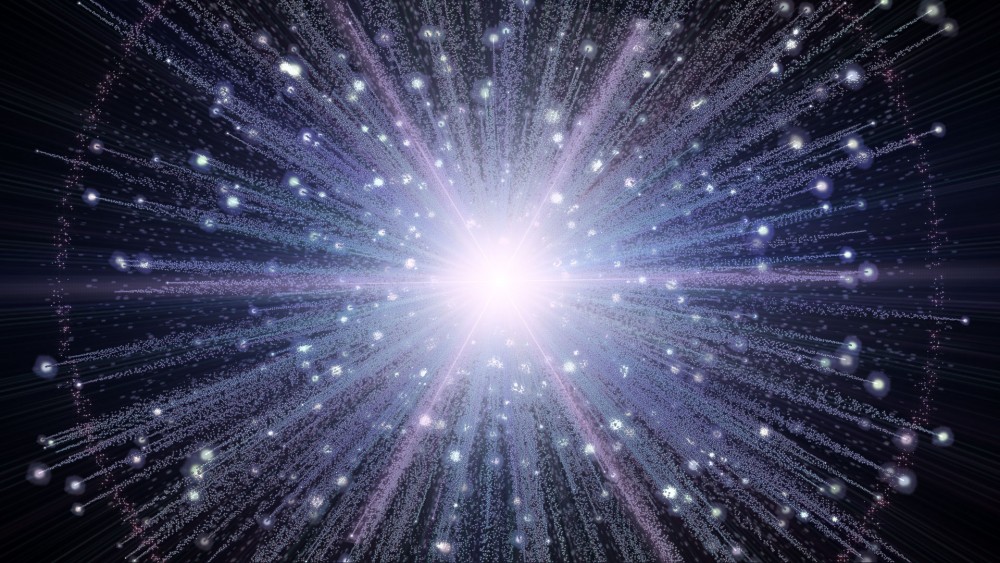 Big Bang: The Fingerprint of God

A team of American scientists, operating a £12 million telescope at Amundsen-Scott base at the geographic South Pole has announced the discovery of what may figuratively be described as the fingerprint of God.

The importance of this finding, announced on Monday afternoon at an excited press conference at Harvard University, cannot be overestimated; one leading physicist has gone so far as to describe it as “one of the most important scientific discoveries of all time”. The phrase “Holy Grail” is being bandied about, and there is talk of the most certain shoo-in for a Nobel Prize for decades. The researchers, headed by Professor John Kovac of the Harvard-Smithsonian Centre for Astrophysics, appear to have found the very echoes of creation.

The announcement confirmed that the Bicep2 (Background Imaging of Cosmic Extragalactic Polarisation) telescope at the Amundsen-Scott polar base in Antarctica had found conclusive evidence for the existence of gravity waves, colossal ripples in space-time that pervade today’s universe and which were formed when the cosmos was just 10 to the minus 35 seconds old – a length of time shorter than it would take the Starship Enterprise to cross from one side of a grain of sand to another.

If this is confirmed, it will be the final experimental vindication of Albert Einstein’s theory of general relativity. It will show once and for all that the notion that our universe began with a colossal explosion of matter and energy 13,978,000,000 years ago – the Big Bang – is correct.

But the implications are more profound even than that. The existence of gravity waves is the “smoking gun” for the controversial theory of cosmic inflation, the idea that right at the start of the universe, nearly 14 billion years ago, everything underwent a colossally fast period of expansion – the “B of the Bang”, if you like.

If cosmic inflation, which we need in order to explain several weird facts about our universe, is correct, then this provides strong support for the notion of the “multiverse”; the idea that what we see when we look up at the night sky is but a gnat on the back of the elephant that is the true totality of creation.

The existence of gravity waves is strong evidence that “our” universe may not only exist alongside an infinite number of parallel worlds, but may itself be infinite in extent, containing endless copies of our galaxy – and indeed our world and you and me – located countless trillions of light years apart.

That is a lot of inferences to make from a discovery at a modest research station on the icy wastes of Antarctica. So what exactly has Bicep found? Before the discovery was made, theorists speculated that the violent, faster-than-light ripping apart of the fabric of space that took place during the Big Bang must have left the universe ringing like a bell, rippling with gigantic waves billions of light years long.

The colossal forces of inflation caused the fabric of space-time – a concept introduced by Einstein as a way of reconciling gravity, motion and time – to start wobbling, like the surface of a sea subjected to an earthquake. One objection to relativity was that no one had evidence that violent events can make gravity form waves like this. Now they have.

The telescope did not “see” gravity waves directly. Instead it looked at photons – particles of light – that have travelled to Earth from a time when the universe was a ball of hot plasma and just 400,000 years old. As these antique photons crossed the vacuum of the cosmos, they were pulled and squeezed by the peaks and troughs of gravity waves, much as a boat is thrown up and down as it crosses a stormy sea. This caused the packets of light to polarise – align in certain directions – in a way that you would not expect them to do if they had crossed space unperturbed by gravity waves. It is these slight attenuations that have been discovered by the Bicep team.

According to Professor Andrew Jaffe, a cosmologist at Imperial College London, this is – almost – proof that inflation theory is correct. “Inflation is the only way we know of to produce gravitational waves in the early universe,” he says, adding that although there are other possible explanations, they are “less compelling”.

And why do we need inflation? It was first proposed in the early 1980s by cosmologists led by Andrei Linde and Alan Guth (who were at the press conference on Monday, looking very happy) to explain some problems with the original Big Bang idea.

The main one is that deep space looks much the same in every direction. There are no gigantic “gaps” – no galaxies in some places and agglomerations in others – which is what you would expect if you had a simple explosion of matter and energy. Instead, the idea behind inflation is that right at the start of the “Bang”, a period of unimaginable, hyper-fast expansion, billions of times faster than light-speed would smooth out the unevenness, much in the way that pulling on a crumpled sheet will make it flat and even.

The implications of inflation are mind-boggling. Few cosmologists believe that if inflation happened it would have produced a universe only as big as the one we can see. The observable “edge” of our universe, the so-called “Hubble Volume”, is a sphere of space about 93 billion light years across, containing maybe half a trillion galaxies, each containing roughly the same number of stars (altogether about as many stars as there are grains of sand on all the beaches of Earth). A magnificent entity.

But that vast ensemble only encompasses the parts of our universe close enough for light to have reached us since the Bang. Inflation suggests that the original expansion created a volume of space-time much, much bigger – according to some equations, infinite. And the most extraordinary thing about inflation is that as you rip apart space you create matter and energy. Not only is our universe probably infinite in size, but it is studded with an infinite amount of stars and galaxies.

Professor Max Tegmark, a Swedish physicist at MIT, is a leading proponent of the “multiverse” hypothesis, which states that our universe is just a tiny part of a much grander mass of parallel worlds. “It’s a bad day for multiverse sceptics, now that the smoking-gun evidence for inflation has been found,” he said on Monday. “Alex Vilenkin, Andrei Linde, Alan Guth and others have shown that inflation generically predicts a space that is not merely large but infinite, teeming with duplicate copies of our civilisation living out countless variations of our lives far, far away.”

This is exciting stuff, but many questions remain. We still don’t know what happened before the Big Bang, or even if this question makes sense. We do not really know what drove this cosmic inflation, nor if it is related to the mysterious “dark energy” that continues to drive apart the galaxies (albeit more slowly) to this day.

And on a more profound level, we do not know what the purpose, if any, of our universe is; or what role, if any, life like ours plays in it. We still do not have an answer to the late Douglas Adams’s “Ultimate Question of Life, the Universe and Everything” (to which he gave the sarcastic answer: “42”).

But the fact that we have, in just a few short centuries, gone from knowing almost nothing about the immense vastness in which our planet sits to hearing the very echoes of the Big Bang is remarkable. Quite the most extraordinary thing about our universe is that we can begin to understand it at all.

Posted on April 5, 2014 by antarcticguide

Falkland Islanders replied with a picture of King penguins to Argentine President Cristina Fernandez claims that the Falklands had become NATO’s largest base in the South Atlantic and was equipped with missiles that could reach any of the region’s countries, and also had “nuclear weapons”. 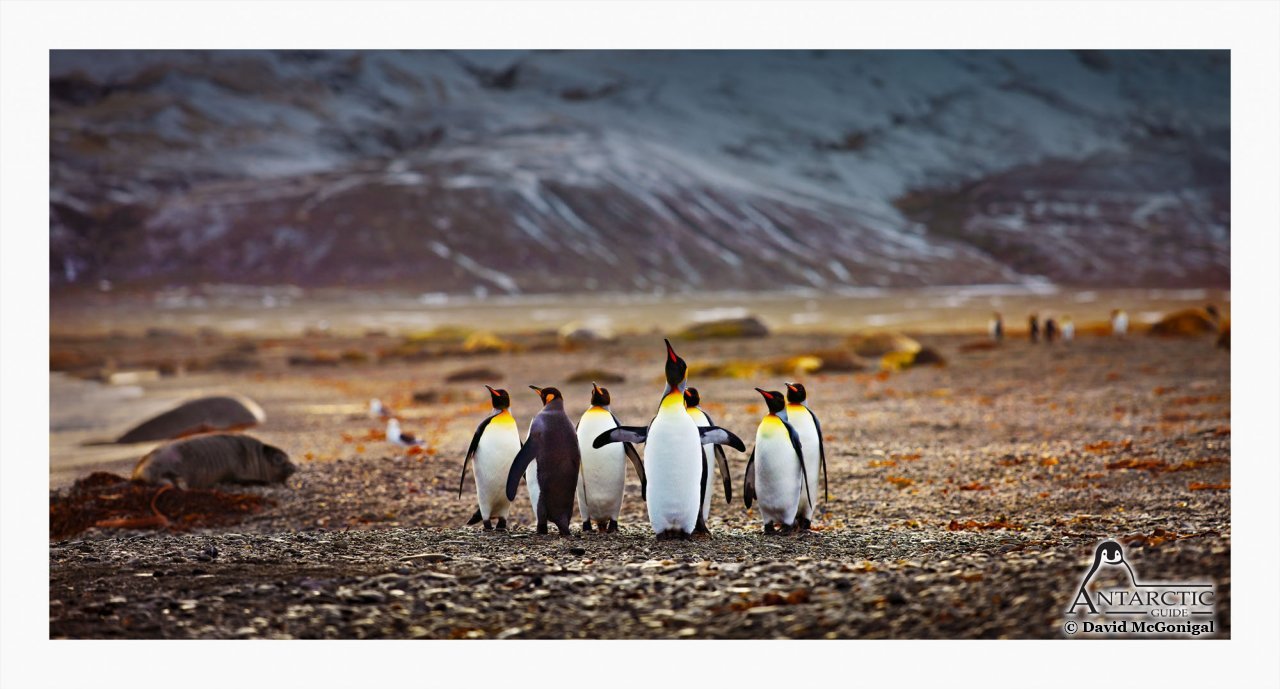 “The Falklands are the NATO largest military base in the South Atlantic”, said Cristina Fernandez on the 32nd anniversary of the beginning of the Malvinas conflict when Argentine military invaded and occupied the Falklands, 2 April 1982.

Falklanders replied with the penguins’ photo and a line saying “our nuclear missiles”.

Using Twitter @falklands_utd a group of Falklanders showed the picture of the King penguins, a common sight in Gypsy Cove and Volunteer Point for tourists visiting the Islands, adding that ”Argentina recently intercepted this pic of our ‘nuclear missiles’. They turned out to be penguins.

The Tweet was followed by others saying that the Falklands voted to remain as a British Overseas Territory; that the Islanders and UK will continue to defend freedom and that the Falklands were British long before Argentina emerged into existence as a country.

Polar specialist Quark Expeditions has confirmed that one person has died and two are injured after an incident in the Arctic Circle.

The passengers were onboard a sightseeing zodiac when it capsized outside of Longyearbyen, Svalbard at 11am on 17 June. The two injured passengers are not critical but are receiving care onshore.

The statement read as follows:

Quark Expeditions Inc. regrets to confirm that an accident has occurred during a Zodiac sightseeing excursion near the14th of July Glacier, just outside of Longyearbyen, Svalbard, Norway, at approximately 11:00 AM local time today. A Zodiac carrying 12 passengers capsized, resulting in the fatality of one passenger and the injury of two other passengers. The injured passengers are not critical but are receiving medical care in Longyearbyen.

Quark Expeditions is doing everything possible to assist those involved and the local authorities during this difficult time. The ship, Sea Spirit, is currently in Ny Alesund, Svalbard, Norway, has undergone a full investigation by authorities, and has been released to continue the expedition.

We will issue further statements as soon as more information becomes available.

Posted in Arctic, News | Comments Off on Arctic Fatality on Quark Expedition
« Previous Article: Obama’s Arctic strategy sets off a climate time bomb Next Article: “Falklands nuclear missiles turned out to be penguins” »