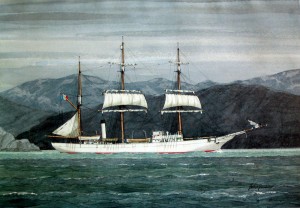 As a young man Charcot had owned a yacht that he called Pourquoi-Pas? (“Why Not?”). When, buoyed by his earlier success and quite generous government funding, he started designing another polar vessel soon after his return, he gave it that name. The strong, well- equipped and comfortable vessel weighed 800 tonnes, and had a new purpose-built 550 horse-power engine to avoid the engine problems that had plagued the first expedition. The ship sailed from Le Havre on 15 August 1908, bound for Antarctica with a complement of 30 officers, scientists, and crew—and Charcot’s new wife, Marguerite, who was to leave the ship in Punta Arenas. Pourquoi-Pas? had an excellent wine cellar, and luxuries such as enough newspapers to dole out one a day through the winter gloom. Just before Christmas of 1908, she reached Deception Island, where Charcot learned that his chart of the Antarctic Peninsula was already in use by the whalers there in their constant quest for new areas to exploit.

On 1 January 1909, they found a sheltered small anchorage at Petermann Island, and named it Port Circumcision after the church feast day on which it was discovered. Only three days later, things started to go wrong, as first the expedition leader, then the ship, were nearly lost. On 4 January, Charcot (accompanied by Lieutenant E. Godfroy, who specialized in tides and atmospherics, and E. Gourdon, geologist/glaciologist, took a boat south to Cape Tuxen and the Berthelot Islands. They planned to be away only for the day, so took no extra supplies, shelter, or clothing. It was a mistake that could have cost their lives. Soon after they finished their last food, the ice closed in and it began to snow. The three men were lucky to survive on the Berthelot Islands long enough to be rescued by Pourquoi-Pas? three days later. Then, mere hours after the rescue, the unfortunate history of the Français was repeated when Pourquoi-Pas? ran onto rocks near Cape Tuxen. Eventually, after considerable effort by everyone, they managed to shift enough cargo so that the ship could pull free of the rock at the top of the tide 24 hours later. They then sailed back to Petermann Island for makeshift repairs.

They spent the rest of the summer of 1909 charting south of the Antarctic Circle, sailing further south than Charcot (or Biscoe) had previously ventured. As winter approached, ice forced Pourquoi-Pas? back to Port Circumcision, where the crew securely moored the ship and ran steel wires across the mouth of the cove to keep icebergs out. Four huts built ashore for the scientific program were lit by electricity generated by the ship. Despite their precautions, a midwinter storm in June drove several icebergs into their bay, and one of these damaged the rudder of the ship so severely that it could be repaired only with difficulty. At the end of winter the men packed everything back on board the ship and sailed north to Deception Island in late November to pick up fresh provisions. There, a diver told Charcot in confidence that the ship’s hull was gravely damaged, and that the vessel would sink if there was another incident. Nevertheless, Charcot resolved to turn south again to conduct his summer program. Beyond Marguerite Bay, which he had named for his wife the previous summer, he discovered new land at 70°S, which was later named Charcot Land (although it is now known to be an island)—not after the modest explorer, but for his famous father. Proceeding west along the edge of the ice, Pourquoi-Pas? turned her bow to the north only on 22 January 1910, when she had reached 124°W. When the crew saw Peter I Island in the distance, they were the first to do so since Bellingshausen had passed by this small volcanic land mass in 1821.

When Pourquoi-Pas? docked at Punta Arenas, Charcot and his crew were greeted by enthusiastic local residents and a flood of congratulatory telegrams. After the ship had been substantially repaired in Montevideo, she crossed the Atlantic to arrive in Rouen on 5 June 1910 to a tumultuous reception and an official escort. The fuss was warranted. The expedition had charted 2,000 kilometers (1,240 miles) of coastline and had given form to the whole western side of the Antarctic Peninsula, as well as collecting so much scientific data that it would take a decade and 28 volumes for it to be published. Roald Amundsen, who described Charcot as “the French savant and yachtsman,” credited him with “opening up a large extent of the unknown continent … and the scientific results were extraordinarily rich … The point that compels our special admiration in Charcot’s voyages is that he chose one of the most difficult fields of the Antarctic zone to work in.”

Charcot was showered with honors, and his courage while serving with the British Royal Navy in World War I was subsequently rewarded with a Distinguished Service Cross. He never returned to Antarctica, but he continued his research in the cold waters of the North Atlantic. On 16 September 1936, Pourquoi-Pas? was wrecked off Iceland; only one crew member survived. Jean-Baptiste Charcot went down with his ship.