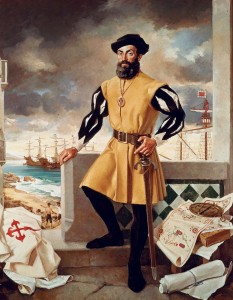 Magellan’s name is writ large in the annals of exploration. Born in Portugal in 1480, he traveled east as far as Malacca (in what is now Malaysia) with the Portuguese fleet before seeking service elsewhere. He persuaded the king of Spain to send him on a voyage westward to prove that the spice islands—the Moluccas, now part of present-day Indonesia—could be considered part of Spain’s western hemisphere of influence. To accomplish this he needed to find a passage around the bottom of South America, a difficult task that took him much further south than he had anticipated. His five ships left Spain in 1519. From Rio de Janeiro they sailed south, and Magellan explored the River Plate to see if it led through to the Pacific—that would have seemed reasonable, as it was on about the same latitude as Africa’s Cape of Good Hope. He continued southward, continually seeking a westward passage and continually being baffled. Finally, he rounded the Cape of the Virgins (Cabo Vírgenes) at 52°50´S and entered the strait that now bears his name.

The Strait of Magellan threads a tortuous and treacherous 525 kilometers (330 miles) between the island of Tierra del Fuego and the South American continent. Magellan sailed through, but could not decide whether Tierra del Fuego was the tip of a continent or an island. It took 38 days to reach the ocean that came to be known as the “Pacific” because it seemed so peaceful. The fleet discovered that it was much larger than expected: they had 14 weeks of near-starvation before struggling into their next landfall at Guam. Magellan was killed on 27 April 1521 in the Philippines, but his surviving ships reached the Moluccas (and, in 1522, Spain), thus proving Magellan’s thesis that the spice islands could be reached by sailing either east or west, and proving conclusively that the earth was round.