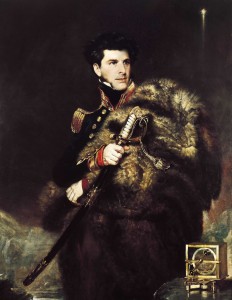 When James Clark Ross set sail from England on 5 October 1839, Wilkes and Dumont d’Urville had already ventured into the Antarctic and had retreated to the north to wait out the winter. There was fierce competition among the Antarctic expeditions of the late 1830s, and Ross was spurred on by patriotism and personal ambition to surpass his rivals’ achievements. Ross was the most experienced Arctic navigator to visit Antarctica. Born on 15 April 1800, he joined the Royal Navy before his twelfth birthday. His most significant Arctic achievement was locating the North Magnetic Pole in 1831. This (and his Byronic appearance) won him great popular acclaim in Britain. A fellow officer described him as “the finest officer I have met with … He is perfectly idolized by everyone.” When British scientists pressed for a voyage to find the South Magnetic Pole—the Magnetic Crusade—Ross was chosen to lead it.

His ships were the 372-tonne Erebus and the smaller Terror—bomb ships, built to withstand the recoil of mortars. These bleak names were not reflected in conditions on board; Ross ensured that they were waterproof, warm, and well provisioned. Ross commanded Erebus, and Terror’s captain was Irishman Francis Crozier, who had sailed the Arctic with Ross. Also on board was 22-year-old naturalist Joseph Hooker, who later brought London’s Kew Gardens to their full Victorian glory. Just before the ships departed, the British sealer and whaler John Balleny brought news of land below the Antarctic Circle and a possible break in the pack ice along the 170° meridian.

Arriving in Hobart Town in August 1840, Ross received permission from the Governor of Van Diemen’s Land to build the observatory “Rossbank” on a hill above the town. But there was bad news as well as good: Ross’s national pride was pricked to learn that Dumont d’Urville and Wilkes had spent their second Antarctic seasons seeking the Magnetic Pole. Ross sailed again on 12 November and crossed the Antarctic Circle on New Year’s Day 1841, near the area that Balleny had suggested. He pushed south, sometimes through heavy ice, to break into open sea on 9 January. He had discovered the Ross Sea, the best ocean access to the South Geographic Pole. Ross’s was the first expedition equipped with vessels suitable for ice work—but they were still sailing ships. Decades later Norwegian explorer Roald Amundsen wrote: “These men sailed right into the heart of the pack … It is not merely difficult to grasp this; it is simply impossible—to us, who with a motion of the hand can set the screw going, and wriggle out of the first difficulty we encounter. These men were heroes.”

Ross was orientated towards the Magnetic Pole, and he was disappointed to encounter land instead of open water. He calculated that the Magnetic Pole was only 800 kilometers (500 miles) away, but clearly there was no direct sea route. But the discovery of new land was worthy of ceremony, so on 12 January 1841 Ross and Crozier landed on an island they later named Possession (71°52´S 171°12´E) and claimed and named Victoria Land for the young Queen Victoria.

Proceeding southeast with the fading hope of finding a seaway to the Magnetic Pole, they had already passed Cook’s furthest south on 11 January and passed Weddell’s 74°15´S on 22 January, when they reached 74°20´S and celebrated with a double ration of rum. Six days later they saw what Hooker described as “a fine volcano spouting fire and smoke.” Ross named it Mount Erebus and its smaller neighbor Mount Terror. An active volcano 3,795 meters (12,450 feet) high and covered in snow was remarkable enough, but as they approached a low white line filled the horizon. Ross wrote that it was “a perpendicular cliff of ice between one hundred and fifty feet and two hundred feet above … the sea, perfectly flat and level on top, and without any fissures or promontories on even its seaward face.” Ross marked it on his chart as a Barrier, as it killed the last hope of sailing to the South Pole; it is now the Ross Ice Shelf. Sailing 390 nautical miles (720 km) eastward they finally found a bay in the Barrier that a crewman described as the “most rare and magnificent sight that ever the human eye witnessed.”

Ross’s party could congratulate themselves. They had collected rocks and plants, taken the first Antarctic sea soundings (and established that the edge of the Barrier ice was afloat), found the Ross Sea, and, by rigorous measurement, established that the South Magnetic Pole was much further south than predicted. The two vessels tied up alongside “Rossbank” on 6 April 1841.

The voyage south the following summer is better known for its tribulations and celebrations than for any ground-breaking achievements. The two ships sailed via Sydney and the Bay of Islands to cross the Polar Front (Antarctic Convergence) on 13 December. Coincidentally they again crossed the Antarctic Circle on New Year’s Day, but this time both ships were locked in pack ice. An ice floe between the two ships became a dance floor to celebrate the holiday in style. Ross dressed up as a woman, and one officer later wrote to his sister, describing the festivities: “Captain Crozier and Miss Ross opened the ball with a quadrille … Ices and refreshments were handed round … You would have laughed to see the whole of us, with thick overall boots on, dancing, waltzing and slipping about … Ladies fainting with cigars in their mouths—to cure which the gentlemen would politely thrust a piece of ice down her back … a “lady” burnt the back of my hand with a cigar.”

But this was the last light moment for weeks. The ships remained trapped as the ice drifted north, and on 19 January 1842 a gale ground the ice against the ships, smashing their rudders. Nevertheless, on 23 February they were again at the Barrier at 78°10´S—their furthest south, a record that would not be surpassed for 50 years. They were to winter on the Falklands, and the next day they set out on the long voyage around Cape Horn.

At first they saw few icebergs, but some emerged through the fog and snow of 12 March. Conditions worsened around midnight and Ross ordered Erebus to heave to for the night. But even as sails were being furled an iceberg loomed dead ahead. Ross described how: “the ship was immediately hauled to the wind on the port tack … But just at this moment the Terror was observed running down upon us, under her top-sails and foresail; and as it was impossible for her to clear both the berg and the Erebus, collision was inevitable … Our bowsprit, foretopmast, and other smaller spars, were   carried away, and the ships hanging together, entangled by their rigging, and dashing against each other with fearful violence, were falling down upon the weather face of the lofty berg under our lee, against which the waves were breaking and foaming to near the summit of its perpendicular cliffs.” Half-naked seamen roused from sleep struggled desperately while Ross, according to various officers, “calmly gave the order to loose the sail … as if he were steering into any harbour.”

In two strokes of luck the ships parted and Crozier found a gap through what had seemed a single berg. In its lee he was able to inspect the damage to Terror. Erebus was almost completely incapacitated and destruction against the iceberg seemed inevitable. The only chance was the intricate maneuver “stern board,” in which a square rigger sails backward—this in a storm with the rigging and sails tied in knots. Few could hear Ross’s calm commands in the chaos, but his do-or-die tactic was successful and Erebus joined Terror in the shelter of the iceberg. Amazingly, two days later the ships were able to continue to the Falklands, arriving on 6 April.

Christmas 1842 was the ships’ third one surrounded by ice as they approached the Antarctic Peninsula on their last southward voyage. Ross had wanted to extend Dumont d’Urville’s exploration and perhaps follow Weddell’s southward path, although he knew that no discovery could be expected along that track. But apart from some surveying around the eastern side of the tip of the Antarctic Peninsula, their main discovery was ice in all its permutations, cutting every access to the south. After six frustrating weeks they were finally forced to give up and resumed an eastward course. Even at 40°W, where Weddell had found open water, they found solid pack ice. However, the further east they proceeded the further south lay the edge of the pack, so they crossed the Antarctic Circle for the third time to reach 71°30´S 14°51´W on 5 March 1843. By 11 March they were north of the Circle, and on 2 September they saw England again after almost four and a half years.