Antarctic Ice Chart: I Only Have Ice For You

If you are heading to the Antarctic Peninsula this austral summer, or have friends or relatives who are, you might like to take a look at the ice charts freely available at www.polarview.aq. And, depending on where you are going, there’s a good chance you will encounter some ice, as the attached chart shows. This was a compilation of information from December 8, 2012 but it’s revealing. 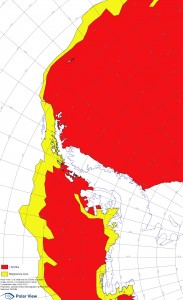 In summary, there’s a lot of ice around this year.

But not this year – in thee past few weeks the pack ice from the Weddell Sea has drifted out well past the South Orkney Islands (the white dots surrounded by red at the top of the map) and the southern end of Antarctic Sound is blocked. The only option is Elephant Island – but even it seems to be becoming surrounded by more and more sea ice.

The yellow marginal ice zone is generally pretty open water but last week the band of ice (where it kinks out at the northern end of King George Island) required pushing ice aside to get through.

The proviso to all this is that the most recent accurate ice chart I’ve seen hasn’t been updated for a week. And ice conditions change a lot in Antarctica. A good storm or even some strong prevailing winds move the ice around a lot. And, of course, finding some ice is essential to experiencing the true majesty of Antarctica.