Australia is to foot the bill for its Antarctic winter rescue flight of an ailing US expeditioner, confident it will be able to call for the same help.

The federal government’s Antarctic Division director, Tony Fleming, said the costs were yet to be calculated for the emergency operation.

It took the government’s chartered Airbus A319 off an asylum seeker run to Christmas Island to pick up a Hobart-based medical team, retrieve the man from the US McMurdo station, and fly him to Christchurch, New Zealand.

“We collaborate with other nations in Antarctica,” Mr Fleming said. “We expect and receive emergency assistance. We’ll take the costs of this emergency.”

The US National Science Foundation said that, with no US assets available at the time, the Australian aircraft had been vital for the evacuation, as was Royal New Zealand Air Force search and rescue cover.

“This is an excellent example of the benefits of long-standing co-operation with our Antarctic partners,” said Kelly Falkner, the National Science Foundation’s acting director of polar programs.

The aircraft returned to Hobart today after what Mr Fleming said was a textbook operation.

Pilot Garry Studd said the flight was among the earliest ever conducted by a wheeled aircraft in the polar season.

When the plane touched down in midday twilight yesterday, the weather was calm with a temperature of -33 degrees Celsius at the Pegasus ice runway carved into the ice shelf near McMurdo, he said.

The male patient, whose identity and condition has not been released, was taken aboard and the aircraft left after about an hour on the ground.

“I understand the expeditioner was extremely happy,” Mr Studd said. 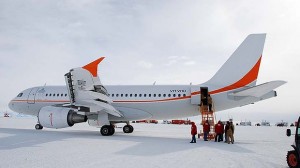