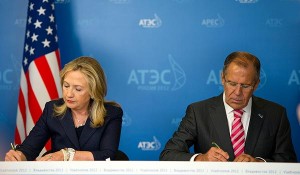 The Secretary of State of the United States of America Hillary Clinton and the Minister of Foreign Affairs of the Russian Federation Sergey Lavrov are signing a memorandum of understanding between the Government of the United States of America and the Government of the Russian Federation on cooperation in the Antarctic and the joint statement on strengthening US-Russian interregional cooperation.

Sergey Lavrov: Dear ladies and gentlemen! We have just signed a bilateral intergovernmental memorandum on cooperation in the Antarctic, which lays the basis for shifting our partnership in the South Pole into a brand new level. This offers an example of constructive cooperation between Russia and the U.S. in this sphere where our countries` interests coincide.

The memorandum suggests regular consultations between the Russian Foreign Ministry and the U.S. Department of State on the implementation of goals and principles outlined in the 1959 Antarctic Treaty, as well as a closer coordination between our countries at relevant international forums. It also suggests scientific cooperation and exchange of data and experts, as well as expanded coordination in carrying out expeditionary activities. The document confirms the two countries` mutual interest in continuing joint inspection of research stations operated by third countries in order to monitor the demilitarization of Antarctica and compliance with environmental requirements. By the way, the first inspection took place in January, 2012, at the McMurdo U.S. Antarctic research station.

The next joint Russia-American inspection is scheduled for the end of this year and will take place at Russia`s Novolazarevskaya research station. We hope it will be as productive as the previous one. Generally speaking, the memorandum demonstrates our countries` plans to jointly cooperate on a whole range of Antarctica-related issues. The statement on the interregional cooperation consolidates positive experience which has already been achieved here and signals our regions that the governments of Russia and the U.S. encourage them to further develop mutually beneficial relations. This is an important sphere of our cooperation since it directly affects the issues which are of interest for our citizens.

Also today we have adopted an unsigned statement which says that measures should be taken promptly to set up the Beringia natural reserve which would comprise Chukotka and Alaska. Like the two documents we have already signed, the text of this statement will be available and I hope you will have a look at them.

I express my gratitude to the U.S. Secretary of State for cooperation and hope that it will continue.

Hillary Clinton: Well, thank you very much, minister Lavrov, and I am delighted to be here and I thank you for the constructive outcomes of our work together as we signed our memorandum of understanding today. I also want to thank United States Assistant Secretary of State Kerri-Ann Jones and our Special Representative for Intergovernmental Affairs Rita-Joe Lewis for helping make today’s agreement and statements a reality.

During the past three and a half years the U.S. and Russia have deepened our cooperation to address shared challenges. We adopted a new START treaty, increased trade and investment and supported Russia`s joining the WTO. And we are taking three more steps to do work together. First, we are formally deepening our scientific cooperation in Antarctica, a continent with vast opportunities for research. Scientists from both our countries will work together to explore Antarctica`s terrain, study the effects of climate change and cooperate on a range of issues to better understand and protect our shared environment. And for the first time, US and Russian officials and scientists are working together to enforce the Antarctic Treaty. There are, as Sergei said, inspecting foreign facilities and looking for violations of the treaty and environmental commitments. This treaty was signed in 1959, so this effort is certainly worth celebrating.

The second step we are taking is designed to stimulate economic growth by harnessing the knowledge and skills of our two nations` local leaders. We are signing a joint statement on interregional cooperation to encourage greater collaboration at all levels of our governments. Regional and local officials will host trade delegations and introduce businesses to new markets. And when it comes to economic growth local partnerships can have global impacts.

Finally, we are issuing a joint statement that signals our desire to collaborate more closely in the region where our countries are only miles apart: a segment of the Bering Strait we referred to as Beringia. With this statement we are underscoring our intent to link the US`s national parks in Alaska with the soon-to-be designated Beringia national park. Our goal is to finalize this arrangement in the coming months so park managers and researchers from both countries would be able to increase their efforts to conserve this unique ecosystem as well as the cultural traditions and languages of the indigenous people on both sides of the Strait.

Let me also mention one more example of Russia-US cooperation which has special resonance this weekend: tomorrow our historic visa agreement will come into force. It will facilitate travel between our nations which will strengthen both people-to-people ties and business contacts. It is fitting that this agreement will come into force during APEC. Business communities in our countries repeatedly asked us for visa liberalization to make it easier for them to work together. And we are happy to be able to deliver. So, this is another very important moment in US-Russia relations, we are grateful for this and other opportunities to work more closely with Russia on areas of common concern that will deliver benefits to the people of both our nations.

So, Minister Lavrov, thank you and your team for all the work that led to these agreements.