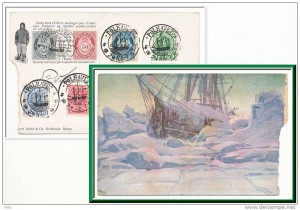 OTTAWA — A hearing Thursday in Canada could determine the fate of plans to repatriate Norwegian explorer Roald Amundsen’s three-mast ship Maud from the Arctic.
A Norwegian group has asked the Canadian Cultural Property Export Review Board to revisit a decision in December denying an export permit for the ship, after residents of Cambridge Bay, Canada opposed losing a treasured artifact that has become a tourist attraction in the far north.
The remains of the ship that once belonged to the Norwegian explorer sit at the bottom of Cambridge Bay in Nunavut, but its hulk is partly visible above the frigid waters that preserved it for decades.
“We understand that the whole hearing will be focused on the importance of Maud to Canada as a historical vessel,” Jan Wanggaard, manager of the effort to bring the Maud to Norway, told AFP.
In 1906 Amundsen became the first European to sail through the Northwest Passage searching for a shorter shipping route from Europe to Asia, something explorers had been trying to find for centuries.
In 1911 he became the first person to reach the South Pole. His attempts to reach the North Pole however failed.
Amundsen again sailed through the Northeast Passage with the Maud — built in Asker, Norway and named after Norway’s Queen Maud — in 1918-20, but was unable to get far enough north to launch a North Pole expedition. Amundsen tried, and failed, one more time from the Bering Strait in 1920-21.
The Maud, built in Asker, Norway, was sold to Hudson’s Bay Company in 1925 and rechristened the Baymaud. It ended its days as a floating warehouse and the region’s first radio station before sinking at its moorings in 1930.
In 1990 Asker Council in Norway bought the wreck for just $1 and obtained an export permit from Canada. The permit however has expired.
An expert appointed by Canada’s heritage minister found that the ship is of national importance to Canada, and that its removal from Canadian waters should be delayed by six months to allow a Canadian group to buy her.
Wanggaard said his group opposes further delays.
They had hoped to obtain an export permit to return the shipwreck to Norway at mid-year so it could be the centerpiece of a new museum, but the Canadian review process has delayed that to at least 2013.
Wanggaard said the Canadian expert also recommended an archeological survey before the vessel is moved, a move the Norwegian group opposes.
“We don’t see any value in a classical excavation because the ship sunk, we have a very good record of the history of how it sunk … and we know the ship was completely stripped in the first years after it sunk,” Wanggaard said.
“So we don’t think it is (necessary) to go through an archeological study.”
Amundsen vanished in June 1928 while flying on a rescue mission with five other people aboard. The plane apparently crashed in heavy fog in the Barents Sea, and his body was never found.