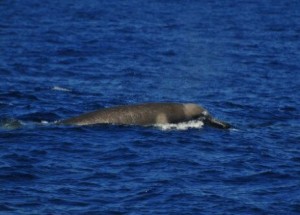 These animals are practically entirely known from stranded dead whales, and there haven’t been many of them.

It surprised researchers to find the Shepherd’s beaked whales traveling in a pod, because they had believed that these whales were solitary creatures.

Shepherd’s beaked whales are so rarely seen that researchers do not have a population estimate.

To find them in a pod is very exciting and will change the guide books. Our two whale experts will now carefully study the footage to work out the whale sizes and so on and prepare a scientific paper.

The AFP notes that the Shepherd’s beaked whale was first discovered in 1937 but it has only been seen a handful of times since then.

Bottom line: Shepherd’s beaked whales aka Tasman beaked whales whales are rarely seen because they come up for air only very briefly. But researchers near Australia saw and filmed a dozen or so of the creatures near Australia. This 2012 sighting of the whales was exciting to researchers, who have seen the whales so rarely that they have no estimate of the global population.