Scott of the Antarctic’s Wreck Found 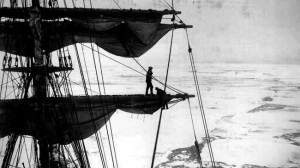 THE SS Terra Nova, the ship that took Captain Robert Falcon Scott and his team on their ill-fated expedition to the Antarctic a century ago, has been found on the seabed off Greenland.

The famous polar exploration vessel was known to have sunk off the coast of Greenland in September 1943 after being damaged by ice.

The Schmidt Ocean Institute, a research organisation, said it towed cameras across the top of a target area which revealed remains of a wooden wreck lying on the seabed.

The camera footage also identified the funnel of the vessel next to the wreck.

“The team compared the funnel image with historical photographs of the SS Terra Nova. All observations jointly identified this wreck as the sunken SS Terra Nova,” the company said in a statement.